“Mommy, is Gramps older than my Daddy?”

Age is a funny thing.  I am 30 years old, but it only takes one moment to transport me back to my 10-year-old self or my 20-year-old self.  A certain smell or image.  An unexpected memory triggered by a familiar face or story.  These instances come up even more now that I am a mother as I watch my child experience new things and grow.

Last weekend, I spent some time with my grandfather who turns 103 next month.  No mis-type.  103.  He was 72 when I was born, so he has basically been “old” ever since I can remember him.  He wasn’t the grandparent who played on the floor with me or took me to a baseball game.  His house was always very calm, which, as a child, translated to unstimulating and fairly boring.  My brother, sister and I did the best we could to come up with games to occupy ourselves.  These included Letter Opener Sword-Fighting, What Looks the Coolest Under the Magnifying Glass, and, my personal favorite, Find the Whitman’s Sampler Box.  Sometimes, we pretended to be detectives or spies, exploring Gramps’ office for clues and analyzing old pictures.

I loved my grandparents very much.  I have one left, and I often think about how different my life would have been if I had gotten more time with my other grandparents before they died.  When I see Josh interact with my grandfather, I feel so lucky.  Since Josh didn’t get to meet Gramps until he was 4 and I wasn’t sure how much exposure he had to older people before we met him, I prepped him a lot for that first meeting.  I kept telling Josh that Gramps is really old.  He would compare him to someone for a frame of reference.  “Is he older than Daddy?”  “Is he older than Grammy?”   I realized during those conversations that there was no comparison I could make to help Josh grasp just how old Gramps was.  I probably talked it up a little too much because, by the time Josh met Gramps (at his 102nd birthday party), he kept about a 10-foot distance for most of the day and seemed worried that this old man would break into a million pieces when Gramps finally got him to sit on his knee.  For a while after that, Josh referred to Gramps almost exclusively as “that really, really old guy”.

Recently, my grandfather had a fall, and he broke his hip.  Every other time he has been hospitalized, I have of course been concerned, but I am just conditioned to expect him to keep living.  After all, that’s kind of his thing.  But this time, I felt a tremendous pressure on my heart.  I didn’t necessarily think he was going to die, but I found myself thinking about all of the questions I had for him and all of the time I wasted for so long not really talking to him and learning from him.  I couldn’t remember his sister’s name or how old he was when his mother died.  I didn’t want Josh to only think of him as “that really, really old guy”.  I wanted him to make memories with him and I wanted those memories too.

To be honest, I was concerned about what my grandfather would think about Josh’s adoption.  He has always been loving and generous to me, but I still worried that he wouldn’t be able to wrap his mind around this.  Or worse, that he could wrap his mind around it, and he wouldn’t approve.  I feared that he would accept it outwardly, but that he would see Josh differently than his other grandchildren.  Obviously, adoption is not a new phenomenon, but it was new to my family.  It was new to me.  I found myself thinking that maybe I was asking too much of this 102-year-old man.  Then I remembered a conversation I had with Gramps when I was in college.  I was visiting him for lunch, and he looked at me with sincerity and said, “What are young people thinking about these days?”  I wasn’t sure what he meant, and then he added, “I know that I am old, but it is important to me that I keep learning things about the world and the way people think.”  I remember feeling inspired and motivated by this statement.  I chose to give my grandfather the benefit of the doubt and stop assuming that he wouldn’t understand.

What a typical Millennial generation mindset I have sometimes: assuming that I have to teach my old grandfather something instead of looking for an opportunity to let him impart wisdom to me.  In the process of being open to the knowledge and experience of my grandfather, I can see now that Gramps has grown, too.  Josh has taught my grandfather (and many others) that his heart is big enough to love him fully and uniquely.  I see the amazement in Gramps’ eyes when he sees Josh and realizes that he loves him as if he has always been there.  That is a gift that he could give this 102-year-old man with more life experience than anyone I have ever met.  After a century of life, my grandfather was given the opportunity to experience the beauty and blessing of adoption.

This weekend, Josh met Dave’s 89-year-old grandmother for the first time.  I saw the same wonder and amazement in her eyes as she watched Josh and looked for opportunities to engage with him.  I never knew any of my great-grandparents.  Josh will remember two.  We will have pictures and videos and memories of these special relationships.  I am grateful for the memories I have of my own grandparents, and it saddens me that Josh will not know them here on earth.  But when I think of my Poppy, Gammy and Nana, I feel a warmth inside me.  They are a part of me.  And they are a part of Josh.  Not because of blood or even personal memories, but because of the legacy of love that is passed down from generation to generation. 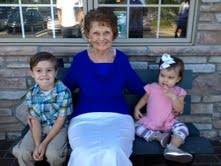 On our last visit to see my grandfather before he broke his hip, Gramps made a paper airplane for Josh and they flew it together.  I got it on video, but I don’t think it will ever leave my memory.  In that moment, it was more than just my 102-year-old grandfather playing with my son.  I was transported back to my own childhood and the moments when Gramps would engage with me playfully and warmly.  He was much more than just a “really, really old guy” then, too. 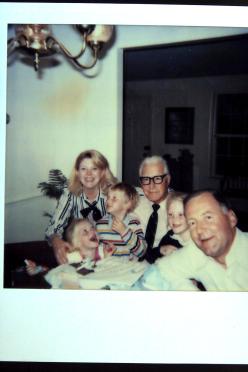 If I live to be 103, I hope I keep learning and growing, too. (and making paper airplanes.)